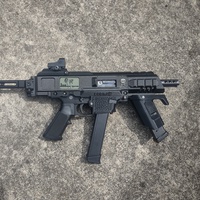 February 2022 Note:
King Cobra 9 bolts are currently being manufacturered and released to build groups in batches.
Membership in a build group will provide you with assistance on your King Cobra 9 build.
To join one of these build groups, please contact Mussy (@mussy73:matrix.org) on Matrix. The developers also recommend you join https://app.element.io/#/room/#CADSKILLS:matrix.org

The King Cobra 9 is a 9mm pistol-caliber carbine built with a minimum of firearms components, utilizing a custom bolt design and a radically new approach to recoil management in homemade firearms: the deleted-blowback system. This system, developed and fine-tuned over a two year development cycle, has resulted in the most advanced 3D-printed firearm released to date, and one that competes with professionally produced PCCs.

The KC9 was jointly developed by Derwood and Mussy. Derwood, consistently one of the best guncad developers since the earliest days of the movement and designer of the MP-1, AP-9 (upon which the FGC-9 is based), WTF-9 and MOD-9, contributes the innovative DBB system; Mussy, another of the earliest guncad developers and one of the most prolific, contributes dozens of interchangeable parts, including several retainer, endcap, magwell designs and more. The enormous variety of parts means that you can customize your KC9 as you see fit.

Purchasing this hardware directly supports the developers of the King Cobra 9. Each KC9 downloaded from DEFCAD also supports these developers. Thank you for your support!

This megapack contains both the base King Cobra 9 model as well as several KC9 mods such as the KC9S, which modifies it to accept a Suomi drum magazine, or the KC9XL, which modifies the KC9 into a rifle configuration. Also included are dozens of alternate versions of the core parts and many more accessories and peripherals to complement the project. These will also be featured as independent projects on DEFCAD in the future, but the megapack provides one convenient link to access them all. This megapack will be kept up to date as new mods and accessories are developed for the platform.

- Removed the magwells X and Y from the base package, replaced with magwell C and superlite. This is because of possible feeding problems experienced after release from magwells X and Y. See README in the Base Model folder for details
- Added assembly guide
- Removed duplicate "I_Love_Lamp" dust cover from accessories folder 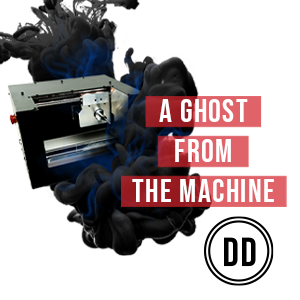 This can occur if you are accessing DEFCAD via a VPN or from outside of the United States.